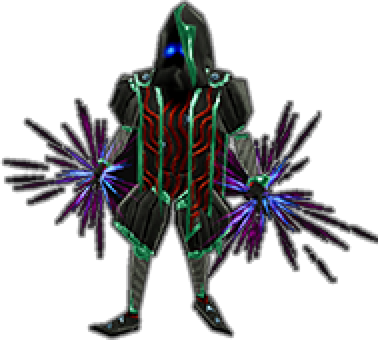 "These mages tumble around to dodge attacks. They fire spread energy blasts."

Battlemage Acrobat is the common enemy type encountered by the Champion in Arcane Exapnse. He is dressed in a robe, closely resembling the clothing from medieval ages, that has a light blue colour, symbolising the elemental magic art he has at his disposal. His face is covered with a hood, so the only thing we can see are his blue glowing eyes. He carries no weapon, as he doesn't need any sort of catalyst through which he would channel his magic, his hands are just enough for the job. For a mage, he is quite durable though, as his whole robe is imbued by the forces of magic power, enabling him to tank much more damage than expected.

The primary means of attack of Battlemage Acrobats are the small energetic sparks, they constantly launch from their hands at very high rate. When there is only one present, it's quite simple to sidestep all of those sparks, however when more of those mages appear, it's nearly impossible to dodge all the projectiles, so even though one projectile doesn't do that much of a damage, when multiple sparks connect, it can bite off Champion's health very quickly. Dispatching these mages might also prove very troublesome, as everytime they receive any damage, their bodies empowered with magic enegry allow them to make siderolls, which, combined with their rather small size, makes it very hard for the Champion to land some hits on them, especially with his slower weapons. This, and also the fact, that they can tank a shot from Celesital Claw, makes the Azure Orb the weapon of choice against them. It's homing capabilites and sustainable dps makes quick work of these pesky mages.