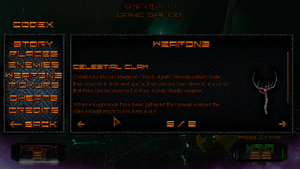 The Celestial Claw is a weapon that fires explosive projectile orb, found as early as the second level of the first Chapter as a secret weapon.

The Celestial Claw would fire a single orb shaped projectile that would explode on contact against an enemie or a wall, dealing AOE damage. The projectile can hurt the player if it fired too close to him.

The Soul Power of the Celestial Claw would fire a much more bigger projectile that deals much more damage, it also seems like the fire rate decreases when using it.

The Celestial Claw can potentialy deals huge damage against a target and can deal huge damage output if it is used against a group of enemies. However to deal the maximum amount of damage against a target, you would need to directly hit him with the projectile, which requires a bit of practice since the projectile is relatively slow for what is. It is possible to ''rocket jump'' with the Celestial Claw if you shoot your feet with it, allowing you to skip some part of the level or reach a higher ground.

- The projectile have many different texture and each one of them leave a unique trail behind them, one of the texture is one that ressemble that of the Earth, although it seems to appear much more rarely than the other texture. When launching the Earth projectile and when it explodes, a text would appear on the top screen saying ''Uh oh you just blew up the Earth'', doing so would unlock the "Armagedon" achievement. 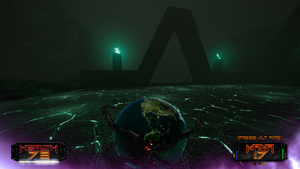 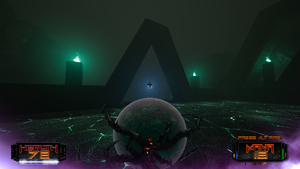