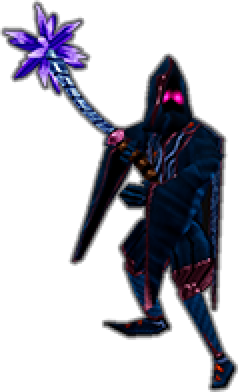 Crystal Mage is a common enemy type encountered by Champion in the Arcane Expanse. Crystal Mage's appearance is quite similiar to Lightning Mage with the only difference being the color scheme of this robe, that has a combination of dark blue and purple colors, which is representing the element he has mastered. Apart from the other mages, Crystal Mages need a catalyst, that enables them to channel their magic, which in this case, is the Star of Torment, or at least some kind of weapon that Star of Torment was based upon, as the color and overall effectivity is completely different. Their durability, however, still remains on very high level, as their robe is imbued with crystal magic, enabling the Crystal Mages to tank at least one shot from Celestial Claw.

Their attacks are very similiar to those of Champion's Star of Torment, meaning they are able to shoot crystal shards at average speed. Although their weapons are much weaker than Star of Torment, and they are unable to pin Champion to the wall, they still deal significant ammount of damage, which combined with them being unable to perform siderolls like their Lightning Mage counterparts, makes them a priority target. The best weapon against them would be some stronger ones, like Celestial Claw, or Aeturnum, although other weapons work as well.