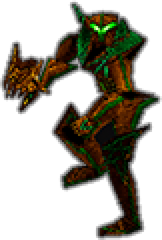 "The lowest worshippers of the moon sect, they honed their speed and sword skills. They have not forgotten how to use them."

Astral Acolyte is the first enemy type you'll meet, after entering the worlds on Amid Evil. He wears green/golden colored armor and is equipped with golden broadsword. He is the lowest ranking enemy in the Lunar cult, that occupies Astral Equinox, and as of this, he appears quite often throughout the whole episode, and poses little to no threat to the Champion.

At first glance, Astral Acolyte can remind some people of zombie, or skeleton, due to the colors of his armor. Well, he also behaves like one. Astral Acolytes tend to run straight at the Champion, since their broadsword doesn't offer them any sort of ranged attack. That makes it very easy for the Champion, to simply shoot them from the distance with any ranged weapon available in their inventory, as they die very quickly. They also die on one hit from the Axe, if Champion finds himself with no mana.