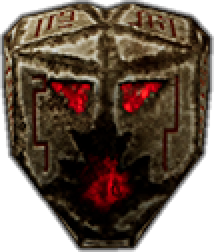 Rock head is an uncommon enemy found throughout The Sacred path. It might have been part of some colossal Golem once, but there are no signs of missing body on the place, where neck would have been. Rock head is the flying enemy of this World, and unlike the other living structures, she has visible facial features, with clearly recognizable eyes, and carved mouth. She is also tanky, like majority of enemies from this World, although Golems are still tankier.

Despite its size, Rock head is very fast moving enemy, and what's even more dangerous, she doesn't even make any sounds, before she actually starts attacking. That may lead to a situations, where player is moving backwards, while shooting enemies in front of him, and then bumps in the Rock head, that immediately starts attacking player, often leading to a quick death on higher difficulties. She has no ranged attack, as her form of offense is breathing fire from her carved mouth. As for every big tier enemy, stronger weapons are recommended, although Celestial Claw might be tricky to use, due to her relatively fast speed and ability to fly.