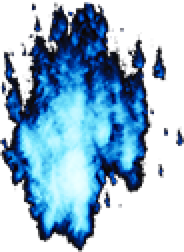 Energetic Discharge is rare enemy type, encountered by the player in The Forges. It's one of the few creatures in this world, that is not made from metal and thus isn't robotic. Energetic Discharge is basically pure Energy from the Forge brought to life by the forces of Evil, with the only purpose of it's existence being to eradicate the player in it's attempt to cleanse the worlds. It resembles the Ghost enemies from The Sacred Path, although the Discharge doesn't have any facial features and it's origin and behavior is completely different. Due to the lack of physical body, Energetic Discharge can pass through the solid mass, often emerging from the ground, and taking the player by surprise. It also gives Energetic Discharge the ability to fly in the air. Luckily, it can still be hurt by conventional weaponry in player's arsenal, but it's durability is very high, despite it's not covered in any sort of metal.

Energetic Discharge is definitely very dangerous opponent and should be taken care of with great care. It's very fast and unpredictable enemy, mostly because it can jump off from anywhere in the level, although the spots of it's appearance are usually marked by square or something else on the ground. As the majority enemy types in The Forges, it tends to keep their distance from the player, rather using their ranged attacks. It's primary attack is shooting parts of it's pure energy at the player. These projectiles aren't as fast, but Discharge usually shoots more than one of them. Good thing is, there is very few of them throughout The Forges, and they are rarely supported by other enemy types, as they usually fight alone or in pairs of two. They are still hard to fight against, due to their speed and high durability. Best weapon against them in this case would definitely be Star of Torment, as player can come closer to them, without significant risk of being hit by their melee attack. Claw can also solve the situation, but the small size of Discharge and it's speed makes it unnecessarily harder to land some hit.