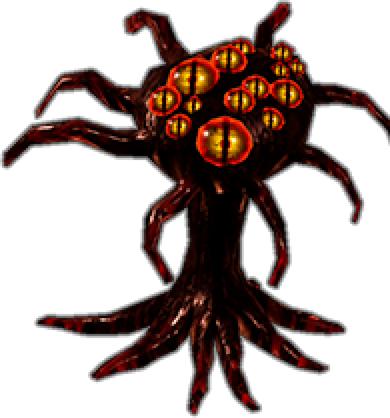 Adult parasite is the uncommon enemy type found in the Domain of the Sentinels, and also the final form of Crawler parasite. In this form, the parasite consumed the remaining torso of Possessed ranged sentinel. He still resembles octopus, although he now has many eyes, instead of just one, and also having more tentacles. He also grew himself a torso, with another set of tentacles, that allow him very slow movement. As his size is very big, he is also the most durable and strongest enemy from the Domain of the Sentinels. His only objective now is to reproduce.

Adult parasite has very slow movement, but he is still trying to get as close to the player as possible. His attack has big range, and consists of big swarm of eyeballs, thrown at the player in shotgun-like shape. That means the closer the player is, the harder it will be to dodge the attack. Due to his durability, he shouldn't be engaged with weaker weapons from player's arsenal, and same as for Adult parasite flier, the most effective weapon against him is the Star of Torment, as he can tank only 3 to 4 hits from this weapon. He should definitely be prioritized target when accompanied by other enemy types, as his attack has very wide spread.