Ghost is a common enemy type cut from The Sacred path. He has been brought to life to haunt the halls of The Sacred path by Corrupt Spirit. He doesn't have solid body, he consists of violet smoke in shape of a humanoid body, with visible facial features. The only solid thing he possesses are his claws on both hands. Without solid body, he dies rather easily, apart from other enemies from this World, that are quite tanky. 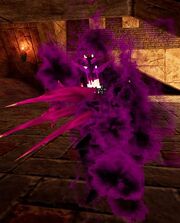 Ghosts are moving very fast towards the player, in an attempt to scratch him with their claw. They are also capable of throwing these claws on big distances, which can be quite dangerous when found in bigger groups. Their weakness is their low durability, as they cannot tank much even from the weakest weapons from player's arsenal. Considered these guys appear in the 3rd World, you should have more than enough red mana, so two or three shots from Celestial Claw should decimate their whole group without any problem.