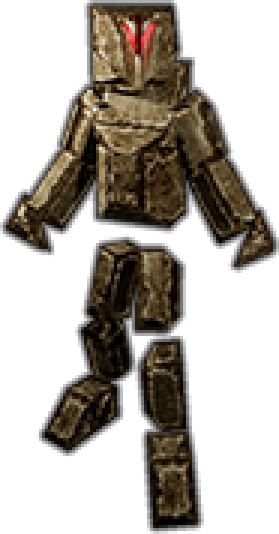 Large golem is the first Huge tier enemy, you encounter in Amid Evil, and also uncommon enemy type of The Sacred path. In appearance he is basically similar to a normal Golem, with the only slight differences being small vine on his head, the red line substituting an eye glows a bit more and more smoke appearing behind him when he walks. However, he is much larger than him, and can also tank tremendous amount of damage, surviving even the shot from Aeturnum.

Large golem behaves similarly to basic Golem, although his attacks are much stronger, as he can set the rock he's throwing on fire, causing an explosion when thrown on the ground. As he is often accompanied by normal Golems, it is wise, to kill those first, as they drop big souls, that can help to recharge player's soul mode, that can help player to deal with Large golem and spare some mana, however, if killing all the Golems is not enough to refill the soul mode, he should be dealt with as a priority target, due to explosive attacks being hard to dodge, when swarmed by smaller enemies, such as Ghosts. Celestial Claw or Star of Torment are best to use against him.