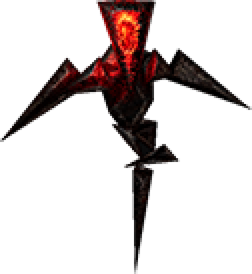 Metal Marksman is the common enemy type encountered by the player in The Forges. Same as the majority of the enemies in The Forges, he is also robotic being, rather than living creature. On the first glance, he can resemble Metal Bomber, but his body is formed less like humanoid, and is constructed from different metal, although his durability is basically on the same level. His weapon is built into his head for better accuracy, and glows with red light, thanks to which, player can immediately recognize the position of Metal Marksman, even in the foggy dark ares of Ruins of Rust.

Metal Marksman behaves in the almost same manner as Metal Bomber, with the main difference being his weaponry. As the name implies, Metal Marksman relies on more precise technology, which in this case, is laser weaponry. Although that makes the projectiles easier to dodge, as they rarely make any unpredictable turn like explosive weapons, they deal significantly more damage. One projectile can strip player of almost one third of his health, if he is hit by it head on. Metal Marksmen are also much more agile than Bombers, so they always quickly position themselves where they can shoot at the player from reasonable range. Luckily their projectile isn't that fast. Also, whenever they reach their desired position and start shooting, they are completely static, which makes them perfect target for planet explosion of Claw, that can one-shot them, or Star of Torment, that also deals decent ammounts of damage to them. Using any weaker weapons like Azure Orb, is not recommended though.