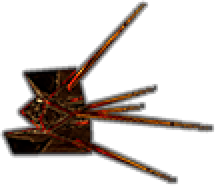 Metal Piranha is an uncommon and also the only easy enemy type found in The Forges. As the name implies, this robotic creature strongly resembles a big nasty piranha, the only difference being, that the Metal Piranha is not a living being, and like majority of the enemies encountered in The Forges, functions only when charged with the energy from the Forge, that can be visible through it's red glowing mouth, which turns black after killing it. Apart from the other creations of The Forge though, Piranha is able to function underwater, and is also the first underwater-only enemy type encountered by the player.

Metal Piranha's behavior and attacks are not very surprising, as their main priority always is chasing the player, and biting him to death. Their main advantage though, naturally comes from being well adapted to underwater environments, that makes them swim much faster than player, and although being rather weak alone, they can devastate the player really quick, if found in bigger groups. This is also, however, their biggest disadvantage, as they cannot leave the water, so player can quit the fight whenever he feels like, if there is reachable surface close enough. The best way to fight Piranhas would be with Trident, as it can destroy the whole group of Piranhas by overkilling one of them and destroying the rest by reflecting lightning. If they get too close however, there is nothing wrong with smashing them all with the Axe, as they have very low durability and can't tank much damage.