Order of the Eclipse 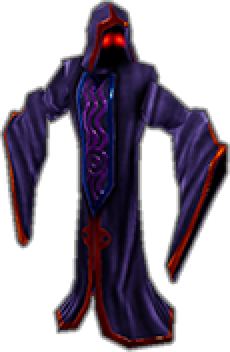 Celestial Mage is a common enemy type encountered by Champion in Arcane Expanse. They are highly skilled in magic, and were able to master the new ancient magic art, that Evil taught to them, meaning that the element of their control is the whole space itself. Although when combined, they were able to open up a portal to whole new dimension, the power of just one mage is extensively limited, as the pressure of celestial magic on one's body is simply too big. They are dressed in a robe resembling those of Crystal Mages, this one however, has some parts in orange color. Their robe has no bottom part, as due to their style of movement, they don't need one, and same as Lightning Mages, they don't really need any wand or catalyst to channel their magic. Same also goes for their durability, which is, despite their fragile look, very high, as their robes are boosted with celestial power.

Celestial Mage's celestial magic power allows them to fly, and open up a portal, through which they can shoot exploding starts, similiarly to Champion's Celestial Claw. Without the catalyst that Champion possess though, they are only able to shoot with very slow fire rate, as it takes a lot of time, before they are able to open up a portal and shoot an exploding star. To add up, they have to stay still during this whole approximately 5 seconds long proccess and so it's not very troublesome for the Champion to steadily take his aim, and take them down. As with other mages however, their biggest power comes from the numbers, especially when accompanied by their faster counterparts, like Lightning Mages. Due to them floating above, it's very hard to keep your attention on them, while dodging the attacks of the mages on the ground. The projectiles their shoot, however, are very slow and predictable, similiarly to Celestial Claw, so moving around the battlefield should be enough to dodge all of those. Best weapon of choice, as for the majority of flying enemies, would be the Azure Orb.