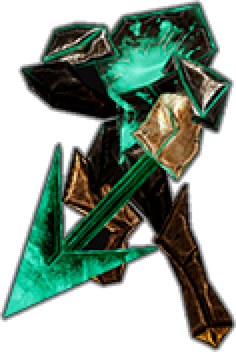 Metal Hooker is the uncommon enemy type, encountered by the player in The Forges. They are basically upgraded version of Metal Bombers, as their body structure and overall appearance look very alike. However, Metal Hookers are powered by turquoise energy, and are also bigger in size, which makes them tankier than any medium tier enemies in this world. Their weapon is a detachable spear-like weapon located in the place of Metal Hooker's hand which also resembles Metal Bomber. But Metal Hooker only has one of his hands replaced by it, and it also serves a completely different purpose then the exploding spears of Bomber.

Metal Hookers are definitely one of the most dangerous enemies in The Forges. They are usually trying to approach the player very slowly, sometimes they are completely static, but they are always located near some dangerous hazard like botomless pit, or concentrated energy from the Forge. Their only of means of attack, as the name implies is their spear-like weapon, which serves the purpose of hook. That means the player can easily end up in any of the hazards mentioned above, often resulting in player's death. If not for that, they at least slash the player for high portion of their HP, whenever they successfully land their hookshot. Luckily, there are very rare occasions when there is more than one of them fought at the same time, and are instead accompanied by other enemy types, so dodging the hookshot should be easy enough, as it's speed isn't that big, and it should also be considered top priority, even if it results in tanking the projectile of other enemy. Due to their slow speed, and durability, the Claw is once again the best choice for dispatching this enemy, although when fought completely alone, player can spare himself some mana and use some weaker weapons to get rid of him, as he poses little threat without the support of other enemies.