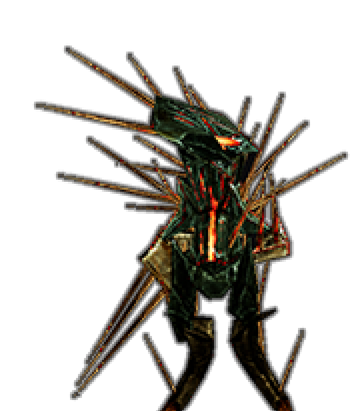 Metal Spiker is the uncommon enemy type, encountered by the player in The Forges. They are robotic beings made from one of the toughest metal the Forge has at it's disposal, and their whole body is covered in spikes. Their head resemble Metal Piranhas, with similiar looking core and they are powered by the orange energy. These enemies are the elite units created in the Forge, and definitely belong in Huge enemy tier, although lacking in their size. Their durability is still spot on for a Huge tier, as they are able to tank 4 shots from the Claw and survive.

Metal Spiker is definitely the most dangerous enemy encountered in The Forges. Apart from majority of enemies in Forges, Spiker tries to close the gap between him and the player, and always tries to approach him with moderate speed, even if he sees him from the floor below. His attack range is visibly shorther than the range of the Bomber, Marksman or Flier, but he compensates for it with it's power. Whenever he comes into medium range of player, he starts splitting spikes from his head at extreme speed on the player, which - if not careful - can almost instakill the player. Due to the speed of spikes being extremely fast, it is nearly impossible to sidestep it to the side, thus making the Spiker top priority in every fight he appears in. Best weapon against Spikers would be the Claw, but due to them trying to approach the player in melee range, the shots from the Claw might hurt the player as well. Star of Torment is one of the possibilities, but usually it doesn't produce enough damage to kill them before they reach the player, so the best choice against those guys would definitely be the Aeturnum.