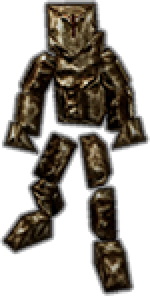 Golem, together with Ghost is the most common enemy type found in The Sacred path. Golem is basically a bunch of rocks brought to life by Corrupt Spirit, that symbolizes the evil in this World. Unlike other enemies in the game, they can spawn directly in front of the player's eyes, since they can only emerge from a specific walls, or rumble of rocks. That makes the player able to predict their locations and properly prepare for a fight. Being made entirely of rocks, their durability is very high, especially for a common enemy, but they are also big enough, so any weapon from player's arsenal should be able to hit them easily.

Golems are very slow, and tend to keep their distance from the player, while throwing rocks at him. These rocks are rather slow, so there should be no trouble dodging them, although it may prove troublesome, when many Golems appear at once. As for any other big tier durable enemies, using weaker weapons is not recommended, with best choice being Celestial Claw, or Star of Torment. For larger group of them, using Aeturnum is also a good idea, as with correct use, whole group can be one-shotted with it's attack, which saves a lot of mana.