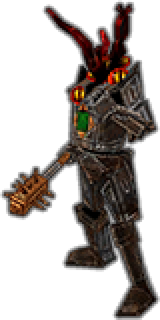 Possessed melee sentinel is the common host for the Parasite hatchlings, that use his body in order for them to develop themselves into their adult forms, and also the most common enemy, in Domain of the Sentinels, often accompanied by Possessed ranged sentinel. This Sentinel wears grey armor, with rectangle-like symbol of their World. His helmet is missing, as instead of his head, we can see a little developed Parasite hatchling, with his color already changed from pink to standard dark red, as the other parasites have. Although in rare occurrences, sometimes when killed, the parasite survives, and his color changes once again, into pink. His weapon is simple mace made from similar material like his armor. Despite him being bigger, than standard Easy enemy types, his durability is very low, which may be caused by the parasite, that drained the body of most of it's life force.

Possessed melee sentinel behaves and attacks standardly, like Lunar squires, simply charging at the player, with no other means of attack. The only difference between these two enemies are, that Possessed melee sentinel is significantly bigger in size, so it's hard to ignore them, in order to concentrate on prioritized enemy types in the backlines. He can be easily killed by even the weakest weapons, and also one-hitted by the Axe.