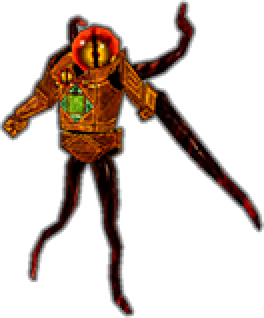 Possessed ranged sentinel is the common host for the Crawler parasites and also very common enemy in Domain of the Sentinels, often accompanied by Possessed melee sentinel. Although Crawler parasites are able to survive on their own, they also try to find the suitable host for themselves, in order to reach their adult form. This Sentinel wears golden armor with rectangle shaped symbol of their World. The reason why Crawler parasites target different type of Sentinel than Hatchling parasites remains unknown. As Parasite hatchlings tend to keep most of the body of their host intact, only removing their heads, Crawler parasites are being more aggressive, leaving only the torso intact, replacing the limbs of their host with their tentacles, and the head with their big orange eyeball. Their host body allows them to move, even if very slow, and they are starting to resemble their adult form. However, same as Possessed melee sentinels, their durability is very low, because of most of the energy has been drained from the host's body.

Due to Possessed ranged sentinel having his legs destroyed and replaced with tentacles, he is moving very slow, and is also not very aggressive towards the player. He only comes close enough to be able to shoot his ranged attacks, which are medium speed blue magic balls, similar to those shot by Crawler parasites. However, due to slow movement speed and predictable attacks, combined with low durability, they also possess low threat to a player, as he can easily be dispatched by any available weapon, like Possessed melee sentinels.