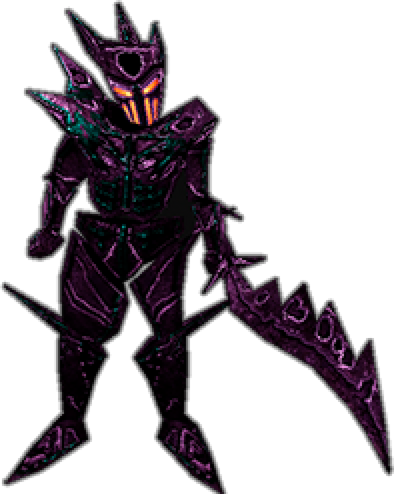 Solar blademaster' is a uncommon enemy type found in the Solar Solstices. Although he is not highest ranking member in the Sun worshipping cult, he is definitely the strongest enemy found in the Solar Solstices. Although not controlling any advanced magic, he is the most skilled fighter amongst the Solar cult, and he works as a captain of Solar knights and berserkers. He wears amethyst armor, with some parts made from emerald, like berserker's armor. His weapon is huge enchanted broadsword. As he belongs to Huge tier, and Lunar set of enemies has no enemy in this tier, he is the only enemy from this World having no direct counterpart in the Astral Equinox World. As a Huge tier enemy, he is twice the size of Solar archmage and can tank a lot of damage before succumbing to his wounds.

Solar blademaster walks slowly towards the player, trying to approach him in melee range. He is capable of ranged sword slashes, due to his broadsword being enchanted by magic, which are similar to those used by Lunar knights, only being much larger, but a bit slower. He is not as tanky as Large golem, but he can also survive the shot from Aeturnum. The weapon that is quite effective against him, would be Celestial Claw, as around 7 or so planets should be enough for him to die.