Solar Saint is a boss of the Solar Solstices and also the fourth boss in the game. He is the highest ranking member of the Solar cult, and has all the others under his command. His armor is made entirely from gold, except for the ruby part on his helmet. He also has a cape, similarly to Moon Guardian, who was also the only one from his cult having the right to wear one. His weapon is big hammer, that has it's front circle shaped to look like Sun. Apart from that, Solar Saint is also highly skilled in magic. He also has a second phase in his fight like Corrupt Spirit, although he is not as tanky as her. He is basically the incarnation of Sun, as after his death, sky becomes dark and Sun disappears, implying, that next Worlds might be taking placing in darkness, as killing the Solar Saint affected them. 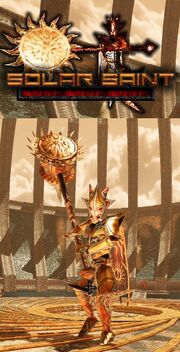 Solar Saint and his health bar

Despite his size and heavy weapon in his possession, Solar Saint is very agile and is definitely fastest boss so far in Amid Evil. He has three types of attack in the first phase. The first one is basic melee attack with his hammer, second one is swinging his hammer above his head, creating numerous Sun-like fireballs that he shoots around the arena, and the third one is a big jump, where he tries to land on a player and smash him to the ground. After like 85% health bar becomes depleted, he begins his second phase, in which he's not using his jump and magic attack anymore, instead he imbues himself with magic, and shoots continuous stream of Sun-like fireballs from his head in the direction of player. After he ends this attack, he chases player a bit, and then uses magic again. There is no easy strategy to make it around this bossfight, on the other hand, all the Solar Saint's attacks are telegraphed in advance and so if player can keep up with his speed, this boss shouldn't be a big deal.