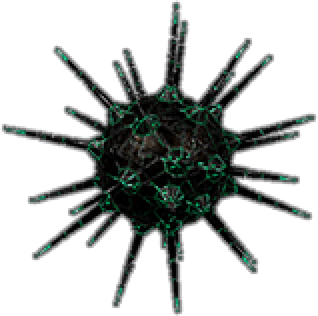 Metal Hedgehog is the common enemy type encountered by the player in The Forges. As his name implies, Metal Hedgehog is basically spiky metal ball, which is powered by the energy from the Forge, and is capable of rolling on it's own, making him a unit for quick inconspicuous attacks. Although the metal that it's made of is on the same durability level of Metal Bomber or Marksman, it has one crucial weakness, which is loud squeaky noise it makes, whenever Metal Hedgehog starts rolling towards the player. If player misheards the sound, they can be spotted easily enough, thanks to their turquoise light, coming from their spikes.

Metal Hedgehog is fairly simple, but still very dangerous enemy. His only pattern consists of rolling towards the player, whenever he comes close enough. What makes this rather simple enemy harder is his small size, which combined with his fast speed, makes it very hard for the player to land some hits on him. This only tends to get more complicated, as almost every weapon that he is hit by, knocks the Hedgehog back from the player, so landing more than one hit at a time may prove quite troublesome. What makes it easier, is that almost every time, the Hedgehogs are fought in groups, so it's very hard not to land the shot from the Claw at least on one of them, which is often enough, because the explosion gets rid of majority of the group. The other choice here would be the Trident with it's overkill effect, that is good for larger groups of enemies, and it also works in this case.