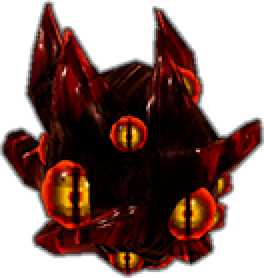 Adult parasite flier is common enemy type, found in the Domain of the Sentinels, and also the adult form of the Hatchling parasite. In this form, the parasite absorbed all the life force of it's host and became self-sustained organism, covered with eyeballs and small tentacles, and also being able to fly, although at significantly lower speed than Hatchling parasites, due to his big size. Their only objective now is to reproduce.

Adult parasite flier is being very passive towards the player, as he approaches with very slow pace, and keeps his distance, using only his ranged attacks in the form of magic balls, which may have a little telekinetic nature. Apart from the other evolution stages of the parasites, this one is very durable, and should definitely be brought down by stronger weapons from player's arsenal. He is especially vulnerable against Star of Torment, as it only takes two hits from this weapon to successfully get rid of him for good.

Watchers take 25% extra damage from the Staff of the Azure Orb.